A: Pesticides differ in how hazardous they are. Some pesticides can be dangerous to human health at certain levels. Under laboratory conditions, scientists predict specific adverse health outcomes. However, in everyday life, under complex conditions, new adverse health outcomes may be revealed. That is why it is important for people to protect themselves and their families, especially babies and children, from exposures to pesticides. It is also why there are laws and regulations in place to keep farmworkers safe from exposures during preparation of the fields, as well as planting and harvesting of the crops. There are also regulations that protect communities from drift of pesticides during applications. The Monterey County Agricultural Commissioner’s Office enforces the California Department of Pesticide Regulation (CDPR) rules. You can learn more about safety regulations governing the use of fumigants and pesticides here.

Q: What is the difference between acute and chronic exposure?

Q: How are people exposed to pesticides?

A: Pesticides can be absorbed through the skin, inhaled through the lungs or ingested from contaminated food or water. Those who work in agriculture or live near agricultural areas are at greater risk from drift of pesticides. Most people are exposed to pesticides in their homes by using pesticides to rid the yard of weeds, the home of insects or rodents or their pets of fleas. Pesticides can be in house dust. Other sources of exposures can come from eating unwashed fruits and vegetables and consuming animal fats. Pesticides to which a pregnant woman is exposed can cross the placenta and expose the developing baby. Although breastfeeding can expose an infant to pesticides, it is still the healthier option when compared to bottled milk. Exploring infants often put their hands in their mouths after crawling on the floor, which may have contaminated house dust.

In 2016, according to the California Department of Pesticide Regulation (CDPR), four students were exposed to pesticides applied at a school site, however, there were no reported cases of children exposed to agricultural use pesticides while at school. For that group, most of their exposures were considered “non-agricultural,” which includes sanitation, home gardens and structural. See CDPR’s Summary of Results from the California Pesticide Illness Surveillance Program at: http://www.cdpr.ca.gov/docs/whs/pisp.htm

A 2005 report, which looked at information gathered between 1998-2002, found that children exposures to pesticides at school was nearly 70 percent due to pesticides usage at the schools rather than drift from local agriculture – 30 percent. See the Journal of the American Medical Association, Acute Illnesses Associated with Pesticide Exposure at Schools, at: http://jamanetwork.com/journals/jama/fullarticle/201292

Farmworkers can be exposed (acute and chronic) during all stages of crop production and can secondarily expose their families by bringing pesticide residues home on their clothes and shoes. Drift of agricultural pesticides, rather than direct exposure, was the most common way that farmworkers were exposed to pesticides. See: CDPR’s Summary of Results from the California Pesticide Illness Surveillance Program at: https://www.cdpr.ca.gov/docs/whs/pisp.htm

Q: What are the potential risks to human health from pesticide exposure? What health problems are directly related to exposure to pesticides?

A: Certain groups of people – agricultural workers, babies and children, pregnant women, and those with compromised immune systems – are more likely than other people to have health problems related to pesticide exposures. The type of health problem may depend on whether or not the exposure is considered acute or chronic.

Acute exposures can cause certain health problems, which depend upon various factors, such as individual genetic make-up, amount and length of exposure, or age of the person. These health effects can include poor performance on brain function testing, nerve damage and depression. Chronic, low-level exposure can lead to nerve damage, mood changes, insomnia and headaches. Keep in mind that these particular health conditions can also be caused by other medical problems. It is best to consult with your physician if you experience any of these health problems. See U.S. EPA’s Recognition and Management of Pesticide Poisonings at: https://www.epa.gov/pesticide-worker-safety/recognition-and-management-pesticide-poisonings

Agricultural workers are more likely to have several forms of cancer compared to other groups of people. It is important to note that in addition to pesticides, agricultural workers are also exposed to other chemicals from exhaust, fuel, fertilizers, solvents and bacteria or viruses that may contribute to their risk of getting cancer. See the National Cancer Institute’s Agricultural Health Study at: https://aghealth.nih.gov/

The Agricultural Health Study also found that female spouses of agricultural workers were more likely to have a low thyroid or thyroid cancer. See 2013 Study Update at: https://aghealth.nih.gov/news/2013.html#p5.

Development of breast cancer has been linked to early life exposures (in the womb until teen years) to DDT, a pesticide that was banned in 1972 in the United States. See the Journal of Clinical Endocrinology & Metabolism, DDT Exposure in Utero and Breast Cancer, at: https://www.ncbi.nlm.nih.gov/pmc/articles/PMC4524999/

and the Journal of Clinical Endocrinology & Metabolism, DDT Exposure in Utero and Breast Cancer, at: https://www.ncbi.nlm.nih.gov/pmc/articles/PMC4524999/

Pesticide exposures may impact the ability to get pregnant, maintain the pregnancy, father children or result in problems with the birth. A now banned pesticide called DBCP was found to cause sterility in males exposed to it at work. See:

National Institute for Occupational Safety and Health, Reproductive Health and the Workplace, at: https://www.cdc.gov/niosh/topics/repro/pesticides.html.

While there are concerns that exposures to pesticides are related to certain birth defects, such as heart, abdomen, limb or facial defects, there is no definitive proof that exposure to a specific pesticides will cause birth defects. See: Maternal Occupational Pesticide Exposure and Risk of Congenital Heart Defects in the National Birth Defects Prevention Study, at: https://www.ncbi.nlm.nih.gov/pmc/articles/PMC4607631/; Maternal Periconceptional Occupational Exposure to Pesticides and Selected Musculoskeletal Birth Defects at: https://www.ncbi.nlm.nih.gov/pmc/articles/PMC4524544/;

Residential Agricultural Pesticide Exposures and Risks of Selected Birth Defects Among Offspring in the San Joaquin Valley of California at: https://www.ncbi.nlm.nih.gov/pubmed/26689858;

and Maternal Residential Exposure to Agricultural Pesticides and Birth Defects in a 2003-2005 North Carolina Birth Cohort at: http://pubmedcentralcanada.ca/pmcc/articles/PMC4833532/.

Scientists are more convinced that babies and young children have an increased risk of acute leukemia or brain cancer if either parent was exposed to pesticides, even in the home setting, at the time of conception, during pregnancy or during early childhood. See U.S. EPA’s Recognition and Management of Pesticide Poisonings at: https://www.epa.gov/sites/production/files/2015-01/documents/rmpp_6thed_final_lowresopt.pdf

Asthma is caused by many contributing factors. It may be related to pesticide exposures under certain situations, especially for those who have genetic susceptibilities. Home exposures were responsible for the majority of reported asthma cases in the years 2000-2008. Agricultural workers with underlying allergies may be more prone to asthma after exposure to pesticides. See Pesticides and Asthma: Challenges for Epidemiology at: https://www.ncbi.nlm.nih.gov/pmc/articles/PMC3901073/

The Center for the Health Assessment of Mothers and Children of Salinas (CHAMACOS) Study has been ongoing since 1999 following pregnant women and their families for health effects from exposures to pesticides and other chemicals. According to this research, exposure to certain pesticides during early fetal development may decrease IQ (a measure of intelligence) by a few points or increase the risk of neurobehavioral problems, such as autism or attention-deficit/hyperactivity disorder (ADHD).

Additionally, early life exposure to certain pesticides can be related to the development of asthma in children. Many of the pesticides that were studied in this research have been banned or are no longer used in the same amount as before. See: http://cerch.berkeley.edu/research-programs/chamacos-study

Q: Have any cancer clusters been linked to pesticide exposure?

A: Cancer is not a single disease occurring in a single organ; there are many types of cancers that have common aspects, but are very different otherwise. Therefore, cancer clusters due to a particular chemical exposure, such as a pesticide, are difficult to pinpoint and only on rare occasions has a particular chemical been singled out as causing cancer. See Federal Centers for Disease Control and Prevention About Cancer Clusters fact sheet at: https://www.cdc.gov/nceh/clusters/about.htm

Q: How does Monterey County compare to the rest of California for health problems of concern?

A: For all cancers, except for cancer of the prostate, Monterey County has fewer cases. Regarding childhood cancer, Monterey County is slightly higher than the average for California. The percentage of childhood asthma cases and hospitalizations for asthma attacks is much lower than the rest of California. See California Cancer Registry Selected Cancer Facts at: https://www.ccrcal.org/wpfd_file/monterey_countyfactsheets2011/ 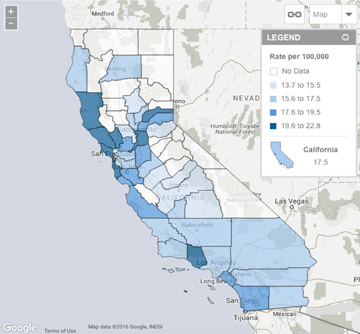 For more information on the health of California children: http://www.kidsdata.org/

NEW: GET A
TEXT MESSAGE

To receive a text message each time a farmer plans to apply a fumigant within a quarter of a mile of your school, sign up here.