WHY DO FARMERS USE FUMIGANTS?

Q: What is fumigation?

A: Fumigation is the injection of gaseous pesticides about two feet into the ground and covered with an impermeable film before crops or trees are planted. The gasses move through the soil to control a wide variety of soil-borne pests and diseases that can cause significant damage to crops. These pests include nematodes (microscopic worms), fungi, bacteria, insects and weed seeds. Fumigant pesticides are not sprayed. They are restricted materials and can only be applied by trained, certified applicators under a permit from a County Agricultural Commissioner. California has the nation’s most comprehensive program to regulate pesticide use.

Q: What crops are grown in fumigated fields?

A: Statewide, including Monterey County, strawberries, raspberries, Brussel sprouts, carrots, spinach, wine grapes, broccoli, tomatoes, blackberries, lettuce, beets, peppers and nursery plants are planted in fields that have been fumigated unless the fields are certified organic. Elsewhere in California, crops grown in fumigated soil also include potatoes, melons and fruit and nut trees. 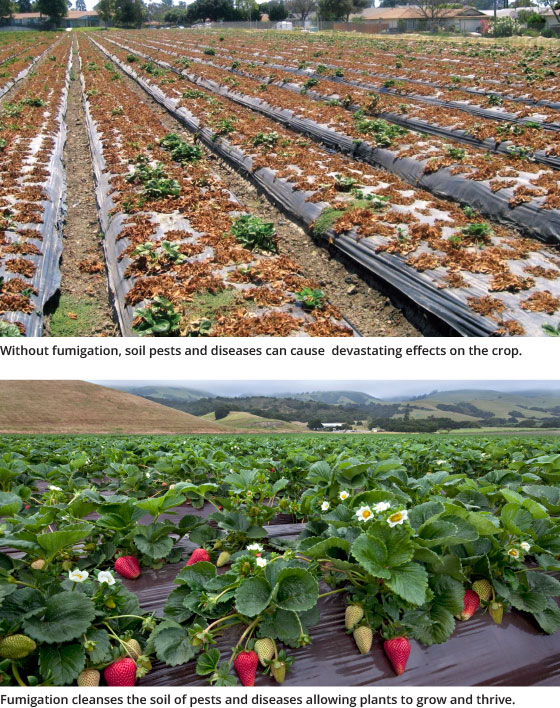 Q: Why are fields fumigated before strawberry transplants are planted?

A: Strawberries are most productive in flat, fertile well-drained soils and farmland suitable for strawberry production is limited. Strawberry growers fumigate their fields before planting strawberry transplants because it is the most cost effective and efficient way to control a wide range of soil-borne pests and diseases. Research has shown that strawberry crops grown in soil treated with fumigants prior to planting are more productive than strawberry crops grown on non-fumigated soil. Crop rotation is an important practice for management of soil-borne pests and disease. Growers typically rotate strawberry production with lettuce, broccoli, cauliflower, other vegetable crops, raspberries and blackberries and other non-pathogen rotational crops in order to manage soil-borne pests and disease. Soil fumigation often benefits rotational crops that follow strawberries by reducing overall pathogen load in soil. Fields used for strawberry production are usually fumigated prior to planting.

Q: What fumigants are replacing methyl bromide, a highly effective fumigant that sterilizes soil but can no longer be used for agriculture production beginning in 2017 under the Montreal Protocol (an international treaty to protect the earth’s ozone layer)?

A: The phase-out of methyl bromide was due to concerns about its effect on the ozone layer, not due to health or safety concerns. When the phase out of methyl bromide began in 2005, strawberry farmers continued to use the fumigant, but began transitioning toward other compounds. The most commonly used fumigants today include chloropicrin in combination with 1,3-Dichloropropene (1,3-D). 1,3-D is also is also applied by itself. Neither chloropicrin and 1,3-D used in combination or 1,3-D alone are as effective in killing soil-borne pathogens as methyl bromide. Additional restrictions on these available fumigants are posing a challenge to farmers with fields in close proximity to schools, residential areas and other development.

In 2015, CDPR imposed additional restrictions on chloropicrin applications to enhance protections for farm workers and people living near treated fields, including:

Effective January 1, 2017, CDPR set new restrictions on 1,3-D by limiting its annual use to 136,000 pounds per township, a six-mile-by six-mile area used to track pesticide applications. Previously, township limits were between 90,250 and 180,500 pounds per year. Other restrictions include:

Q: How has the phase out of methyl bromide affected farmers in Monterey County and elsewhere in California?

A: As farmers replaced methyl bromide with less-effective fumigants, they experienced an increase in soil-borne pathogens, including macrophomina, fusarium and verticillium. Loss of land available for production due to buffer zone requirements and additional, costly restrictions on pesticide use has intensified efforts to find alternatives to manage soil-borne pathogens. Despite millions of dollars and years of research to find alternatives to fumigants, no equally effective replacement has been found. However, the research has been instrumental in the development of new technologies that reduce air emissions and enhance safety, increase efficiency, and new approaches to managing soil-borne pests and diseases.

Q: How are fumigants injected into the soil?

A: Fumigants are applied through deep-shank injection or subsurface drip application (both under plastic tarp) to help keep them in the soil and maximize effectiveness. Directly after fumigant application strawberry, raspberry and blackberry fields are covered with total impermeable films that reduce emissions, increase fumigant retention and in some cases, lower the dose needed for pest and disease control. Application methods vary by location, soil type, temperature and targeted pest or pathogen. In Monterey County in 2019, 62% of fields fumigated were fumigated using the shank injection method, which involves a tractor with a plow inserted into the soil at a prescribed depth. The remaining 24% of these fields were fumigated using the subsurface drip application method, which involves distributing the pesticide mixed with water through an irrigation system buried several inches below the surface. Successful fumigation applications require adequate soil preparation, correct soil tilth and proper soil moisture to maximize safety and efficacy.

Organic and conventional strawberry growers use plastic mulch on their strawberry fields for food safety and fruit quality (to keep fruit from coming into contact with soil). Plastic mulch is also used for weed management and to maintain soil moisture. Although the plastic mulch is similar to total impermeable film, organic fields are never fumigated.

A: No, because they dissipate before crops are planted.

A: Soil fumigants are restricted use materials, which means they can be purchased and applied only by trained, licensed and certified applicators under a permit from a County Agricultural Commissioner.

Q: What is the life cycle of a strawberry and how does this life cycle affect the timing of fumigations?

A: Thanks to California’s temperate climate, the commercial farming of strawberries thrive along the coast in rich, sandy soil. Strawberries are grown as an annual crop in California. The plants are propagated in soil fields in nurseries in Northern California and Southern Oregon, dug out of the soil as fresh transplants, transported cooled, and held in cold storage until being transplanted into commercial fields. Nurseries are allowed to pre-treat their fields with methyl bromide under an exemption in the Montreal Protocol. If a nursery uses fumigants, its transplants are pre-approved by the California Department of Food and Agriculture for certification as disease free and approved for out-of-county sale. Transplant stock cannot be transported across county or state lines unless it is certified disease free.

California’s extended growing season (up to 12 months) contributes to higher strawberry yields per acre than any other growing area. Strawberries grown in other areas of the country have shorter production cycles ranging from an average of five months to as short as a few weeks.

Strawberry production shifts along the coast between northern and southern California with the changing seasons. Southern California strawberry production typically occurs in the late fall and winter periods while summer production occurs in Northern California in the spring and summer seasons. The Watsonville and Salinas growing region account for almost half of the state’s total strawberry acreage. Soil fumigation in Monterey County typically occurs from August through November, depending on weather conditions. Strawberry transplants are planted approximately 10 days after fumigation when the total impermeable films are removed. Strawberries are usually harvested from April through November in the Watsonville and Salinas region again depending on weather conditions.

Q: Are any transplant strawberries, including those destined for organic farms, grown in non-fumigated soil?

NEW: GET A
TEXT MESSAGE

To receive a text message each time a farmer plans to apply a fumigant within a quarter of a mile of your school, sign up here.